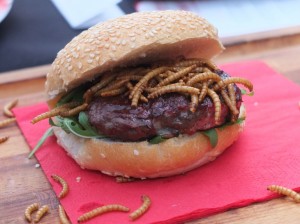 Gobbling on grubs and scarfing down scarabs for Thanksgiving?!?

Just double-checked… “How to make bug-filled Thanksgiving dishes” was NOT in our recipe books.

Gizmag posted an article about entomophagy (eating insects), stating that 80 countries have some form of insect consumption in their diet. A London company even gave away free insect-inclusive items as part of a publicity stunt.

Would you like flies with that? (Photo Courtesy gizmag.com)

Sure, we’re aware that some cultures have included insects as part of their menu… 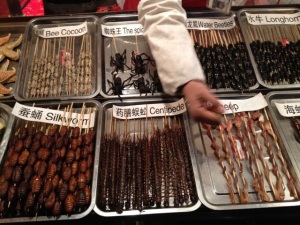 At many Asian vendors, you can get your grub on a stick (literally!!!!)

Street vendors in Asia, Africa, and the Americas have been offering meal(worms) to go for years but it looks like the bug craze — which is still a very foreign concept in the US — is hitting a little “closer to home” as of late… and no, we’re not talking about Bear Grylls’ latest survival/reality show…

Although we’re BIG supporters of keeping bugs off our kitchen tables — especially during the holidays when family is over— our interest was piqued by a rather “buggy” Thanksgiving meal being offered up this year in the Audubon Insectarium‘s “Bug Appetit” kitchen in New Orleans.

Some items on the Thanksgiving-themed menu include “turkey with cornbread and mealworm stuffing,” “wax worm cranberry sauce” and “pumpkin pie with a crispy cricket topping.” 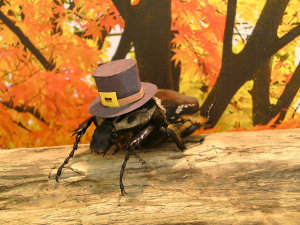 We’re still not convinced that the pilgrims had similar recipes, despite the adorable hat. (Photo Courtesy NOLA.com)

The Insectarium is known for its exhibits housing THOUSANDS of live bugs (our tech’s hearts just skipped a beat), and in addition to their seasonal offerings, they have “year-round” insect cuisine available, such as chocolate “chirp” cookies and “six legged salsa” using crickets as an ingredient.

This isn’t the first year the Insectarium has offered this type of holiday fare, either… they’ve made their own tradition of it!

Hope they don’t mind, but we’ll stick to our bug-free dishes and traditions this year! 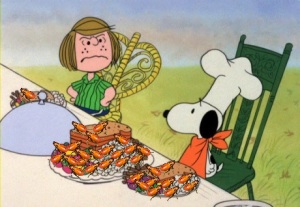 What about you? Have you ever had a buggy dish? Would you be adventurous enough to try a turkey dinner that’s a little more “exotic?” What dishes/traditions are you looking forward to as Thanksgiving approaches?