Down And Dirty Guide to Bee and Wasp Control

Due to the warmer climate of Southern California, many businesses and homeowners find themselves housing unwanted tenants: Bees and wasps!

Though bees (and even wasps) can be helpful to the ecosystem due to their pollination habits, many people consider them to be a potential health hazard. It’s estimated that 2 million Americans are allergic to bee stings. Even if you’re not allergic to bee stings, the stings are painful and can lead to discomfort days later in some cases.

Bees also release a hormone that acts an attractant which causes other bees to swarm the area (that’s why bees know which threat to target if a hive is in danger).

By late summer or early fall, bees and wasps have often reached their population peak. Reproduction slows down over the winter months, but the population (and the hive) can continue to grow indefinitely if left alone. Fortunately, their are many pest control companies who offer extermination services. We even offer LIVE bee relocations to reduce the ecological impact that a removal can have!

So what should you look for if bees or wasps are a concern? Below is a quick guide to 5 common bees and wasps to help you as the weather starts to heat up:

1). Yellow Jackets are very versatile in their home selection. usually they prefer to build a nest (often football shaped) high in a tree or under eaves of houses. If those spaces aren’t available, though, they’ll sometimes choose to set up shop in wall voids, tree stumps, attics and other places. 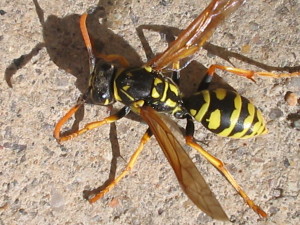 2). Paper Wasps are large, dark and have long legs, and build open nests,  often in sheds or unused structures. The queen lives through winter months and continues to build at the same location, which can lead to very large nests and very large populations. 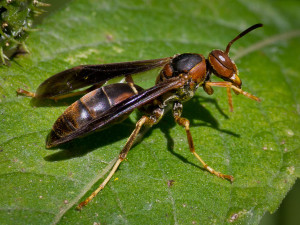 Paper wasps should NOT be confused with paper boys. One will bring you the news, the other can cause you to be IN the news

3). Mud Daubers build the nests you see that are mud stuck on the side of a structure, usually under the eaves or in an attic. The nest has to be kept dry, so they are usually found in very hard to reach locations. 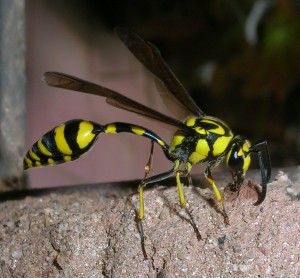 If aliens exist, we imagine they would probably look like this!

4). Honey Bees are most known for their honey hoarding, but they also help a lot in pollination and plant reproduction. They have stingers that detach from the body once used (which, incidentally, kills the bee). Honey bees often nest in trees and produce nests which, if left alone, can grow quite large! 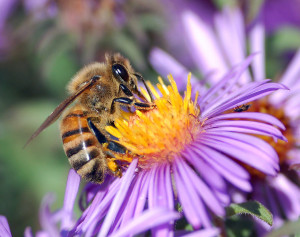 5). Bumble Bees are larger than their cousins, the Honey Bees. Though both have very similar characteristics, their hive structure varies. Bumblebees have a very “messy” hive, and prefer to nest in areas that have plenty of shade. 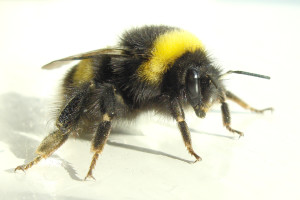 So do you have a bee hive or wasp nest? Or maybe you’ve spotted a swarm that’s looking to take up residence at YOUR residence? We do exterminations, live bee relocation, and hive removals! Give us a call now for your FREE estimate!