Don’t say you weren’t warned. Swallows are protected under the Migratory Bird Treaty Act of 1918 making it illegal to control an infestation on your property from February 15th to September 1st, as enforced by the California Department of Fish and Game. This time frame is recognized as breeding season for swallows.

Swallow problems are often perceived as “out of sight, out of mind” for homeowners and property managers. Therefore, effectively applying bird abatement techniques for swallows within the legal time frame is put off while the square-tailed birds have migrated south for the winter. When swallows finally return to southern California in late February or early March after their northward migration from Central America and Mexico, it is too late to resolve the problem.

After winter, swallows migrate in early February by the eastern slopes of the Andes, then following along the Gulf Coast. Once they reach northern Mexico, they split into two groups – one heading north on the Pacific coast and the other using the Mississippi River as a guide northward.

Are Swallows A Nuisance?

Most may not consider swallows to be a nuisance bird and probably wouldn’t think a swallow nest is worth the effort to eradicate. However, when present and active on your property, this type of bird can create a mess with their muddy nests that are attached to the sidings of homes and the droppings they litter areas below. But until you notice these occurrences, a call to the bird control professional may not be on the to-do list. Unfortunately, when you do see the active swallows and are ready to remove them – it’s too late.

Eaves and sidings of structures become the foundation for unsightly mud nests – made primarily of sand and small amounts of silt and clay- when swallows inhabit a property. Nests are cemented to the wall with mud. Returning colonies are a larger population than the previous year and build more nests next to existing ones, forming a dense cluster. Two to three additional nests can be built per season. 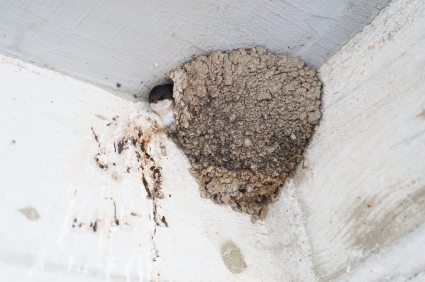 Swallows build their nest almost always on man-made structures using a mixture of mud and grass stems. A platform is built on the vertical surface, then the walls are added to create a cup-like or semicircle nest.

Other consequential issues associated with swallows are debris from falling mud nests and an abundant amount of droppings that not only create aesthetic problems, but defile machinery or cause potential health hazards from contamination of food sources. Secondary infestations can also occur from mites and swallow bugs which are frequently found in swallow nests.

To avoid the headaches of an infestation, the solution is to start a bird abatement strategy now, before breeding season begins.

Nest removal is a necessary step to control swallows since they are attracted to previous nesting sites, but is considered futile unless other bird control methods are in place. Thoroughly cleaning deteriorated nests and any remnants is recommended to prevent attracting colonies in the future. A permit request may be required in certain areas for removals. If eggs or young are present when requesting a permit, the application will most likely be denied.

Exclusions – or bird netting – provide a permanent remedy by creating a physical barrier between the bird and the previous or potential nest site. A permit is not required for this method if it is before breeding season. It is necessary to install netting to not only previous nesting areas but all potential spots. Swallows will select alternative locations on the same structure if netting is not preventing them from entry.

It is imperative that exclusions are properly installed to increase effectiveness and prolong the life of the netting. Mesh that is not pulled taut can result in breakage at mounting points deeming the netting to be ineffective. Professional bird control specialists are often hired to effectively install exclusions and other bird deterrents.

Start protecting your home now from the swallows that will be migrating to your area in the near future, preventing a series of problems later – that you can do nothing about. If you need help from a expert pest control technician trained in handling swallows, call Pro Pacific Pest Control for a free estimate.