Unlike most other pests, when gophers infest a property, they do not use home structures to nest, but rather they reside just below the surface in a tunnel system. Their tunnel system is a series of narrow, underground burrows that lead to various wider openings such as a main nesting area, feeding areas, food storage, and waste holes. These enlargements are formed into a sphere with the nesting area layered with dry grass or similar vegetation.

The burrow system can cover an area of 200 to 2,000 square feet with the main runway situated parallel to the surface and about 6 to 18 inches below. Nesting and food storage areas will be located as deep as 6 feet.  Tunnel systems that cover a larger area are usually found in areas with dry landscaping in order to be near an adequate amount of food resources.

Short, lateral tunnels connect the main runway to the surface and are covered up by a mound.  The mounds can be seen on the surface and are shaped similar to a horseshoe. The open side of the mound is the direction the tunnel is pointing in the ground. The logic for this is that gophers use their claws and incisor teeth to throw soil backwards towards the surface while creating the burrows so a pile builds up in the opposite direction. On top of the mounds are plug holes that seal the entrance and also act as a barricade for predators.

Below is a diagram of a gopher’s burrow system to illustrate the structure and enlargements. 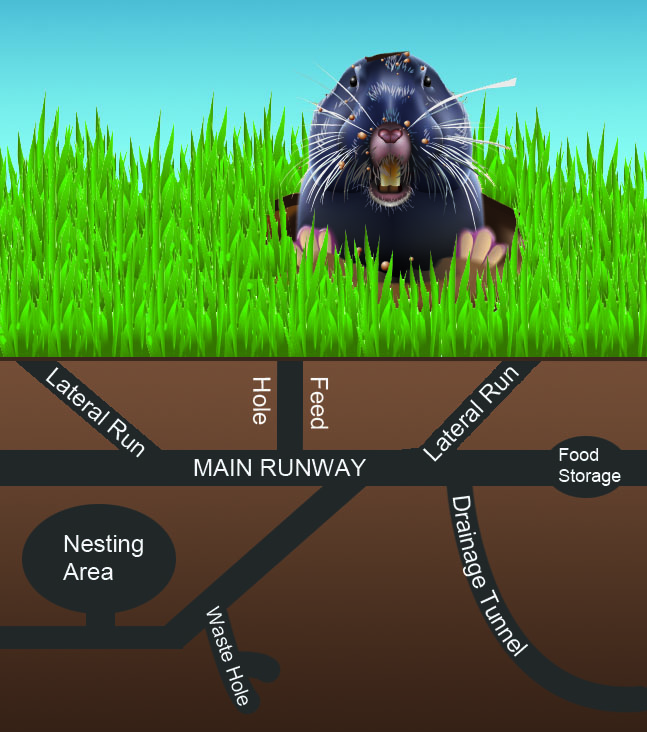 Gophers have many predators including snakes, coyotes, skunks, and more. Snakes could easily enter a gopher’s burrow if the plug was not in place. Gophers do not venture too far from their underground infrastructure, and for even more security from natural predators, feed holes are created near above ground food sources. These holes allow for the gopher to feed without being any further than a body’s length from the entrance – limiting the time on the surface and decreasing the chance of becoming prey.

The quality of the soil and the depth of the tunnels are important to the survival of this mammal. Shallow soils can collapse easily making the system insufficient, while soil with high moisture content can uphold well. Another factor to consider is the atmospheric and exhaled gases that must penetrate through the soils to the surface. Porous soils that permit drainage are ideal for this gas exchange from above ground to the underground and vice versa. Heavy moisture or high clay content in soil will make the ground not suitable for a gopher burrow system.

Pocket gophers can continue to expand their burrows as needed to find food or for mating. Males generally create a more linear burrow system, as opposed to a complex, divided system as it provides a better chance for the male to encounter a female’s burrow. However, gophers are very independent and a male and female will not share the same living space much longer after their young are born.

The infrastructure can continually be changing as gophers seal off areas or dig new pathways as needed for food or mating. Underground water lines or sprinkler systems can be damaged by the incisor teeth of a gopher as they create burrows. Trees can also be damaged during the burrow process from root pruning or clipping.

In the video below, a inside glimpse of a burrow is caught with a camera and displays a gopher’s ability to shovel dirt around to close off a previous runway. The video also captures the gopher feeding on vegetation and the almost effortless shuffling of its body within the limited space to accomplish the sealing.

The above diagram will help to visualize the tunnels when using gopher control methods, especially using a probe. The gopher burrow system is an intricate underground infrastructure that is efficiently setup to meet the needs of this subsurface mammal that could be living right underneath your toes – literally.