“Woodworm” Woes and What to Do

When you think of spring, you probably envision blooming flowers and the return of warmer weather. But in the pest control industry, spring marks the beginning of peak pest season, when most insects are coming out of their winter hiding spots, mating – and in some cases – finding their way into our homes. Unfortunately, one of the most common springtime pests is also one of biggest threats to our homes and properties – termites.

Termites (and their equally infestation-prone — and annoying— “cousins,” woodworms) have been around for more than 120 million years. They are social insects and live in colonies that are usually located in the ground or in wood. Termites feed on the cellulose in wood and wood by-products, such as paper. They are estimated to cause $5 billion in property damage every year. What’s worse, this damage is not typically covered by homeowner’s insurance, and – because they tend to remain out of sight – their damage can go unnoticed for many years, until serious issues arise. Therefore, it’s important to understand the life cycle of termites, and the signs that a colony has taken up residence in your home. 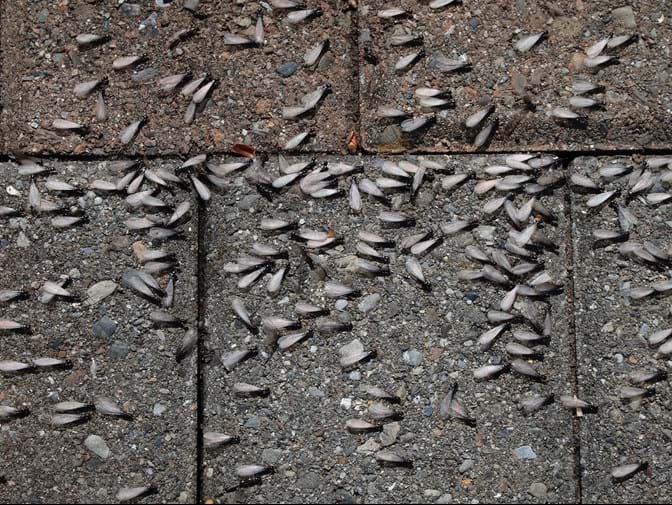 There are more than 2,000 known termite species in the world, with at least 50 species occurring in the U.S. Termites are typically classified into three groups based on the location of the colony – subterranean, drywood and dampwood. A colony is made up of workers, soldiers and swarmers. Workers maintain the colony, construct or repair the nest, and forage for food for the colony. Soldiers are sterile, and their main role is to protect the colony. Neither workers nor soldiers have wings.

Swarmers, also known as reproductives, have two pair of wings, which lie flat over the abdomen when not in use. In the springtime, after the last freeze – usually when temperatures reach about 70 degrees – the young adult male and female swarmers emerge from their nests in large groups. The female termites release ‘mating pheromones,’ much like perfume, to entice male termites. Once the male locates an alluring female, they break off their wings, symbolizing that they are a couple. The new couple then select a nest location, mate, and become king and queen of a new colony. The queen has been known to live for 30 or more years.

Depending on the species, it can take three to four years before a newly founded colony reaches maturity and produce its own swarmers. In the first year, the queen can lay anywhere between zero and 22 eggs. So at the end of the first year, a subterranean colony may contain as many as 75 individuals, whereas drywoods may contain only a dozen. Because of this, it can take many years before a colony is large enough to cause visible damage to the wood they infest.

In colder regions where termites do not typically survive the winter, new colonies can be started in one of two ways; when infested wood is introduced to a new location, or by division. Division typically occurs when a new food source is located and a subcolony is formed to exploit the source. Eventually, this subcolony can then produce the needed reproductives from nymphs (young termites), and completely break off as its own colony.

Swarms (and the shed wings left behind) are often one of the only outwardly visible signs of the existence of termites. Because of this, many people are under the misconception that termites are only a problem in the spring. However, some termite species – including subterranean termites – can remain active (though out of sight) year-round, especially in warmer climates. In these cases, termites can be at work, eating away at wood 24 hours a day, 365 days a year.

With the exception of conehead termites, most termite species cannot crawl on the open ground like ants and other pests. Instead, they build mud tubes to travel between their colony and food sources. These mud tubes are another sign homeowners can use to identify the presence of termites near their homes. Homeowners should also be on lookout for cracked or bubbling paint and wood that sounds hollow when tapped. If you do see signs of termites in or near your home, it’s important to work with a professional to treat the infestation before serious damage is done. Termites are NOT a pest that can be treated with DIY measures.

If you suspect a termite infestation, or to have your home properly inspected for termites, Contact us NOW to minimize structural damage.