Thanksgiving Dinner – Insects… The Other, OTHER White Meat?

As Thanksgiving approaches, many of us have begun the annual preparation of food for the onslaught of extended family — and hungry mouths — incoming. Most will plan for turkey, mashed potatoes, stuffing, cranberry sauce, and often “family recipes” are brought out to decorate the table (and please the palate). The tradition hearkens back to a harvest celebration between Pilgrims and the Wampanoag tribe. 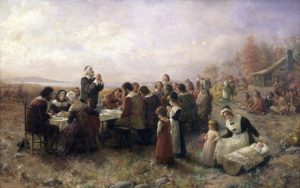 There are only two accounts of the first Thanksgiving, and unfortunately, neither of them included recipes to be shared on Pinterest, and obviously Instagram wasn’t around to snap food shots, either…  so the closest thing we have to guess at what dishes covered the table is how Edward Winslow  and William Bradford described the first Thanksgiving feast: 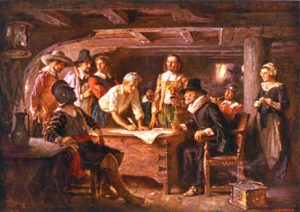 “Dearest Susan, truly, the cornbread is on point!”

“Our harvest being gotten in, our governor sent four men on fowling, that so we might after a special manner rejoice together after we had gathered the fruits of our labor. They four in one day killed as much fowl as, with a little help beside, served the company almost a week. At which time, amongst other recreations, we exercised our arms, many of the Indians coming amongst us, and among the rest their greatest king Massasoit, with some ninety men, whom for three days we entertained and feasted, and they went out and killed five deer, which we brought to the plantation and bestowed on our governor, and upon the captain and others. And although it be not always so plentiful as it was at this time with us, yet by the goodness of God, we are so far from want that we often wish you partakers of our plenty.” – Edward Winslow

“They began now to gather in the small harvest they had, and to fit up their houses and dwellings against winter, being all well recovered in health and strength and had all things in good plenty. For as some were thus employed in affairs abroad, others were exercised in fishing, about cod and bass and other fish, of which they took good store, of which every family had their portion. All the summer there was no want; and now began to come in store of fowl, as winter approached, of which this place did abound when they came first (but afterward decreased by degrees). And besides waterfowl there was great store of wild turkeys, of which they took many, besides venison, etc. Besides, they had about a peck of meal a week to a person, or now since harvest, Indian corn to that proportion. Which made many afterwards write so largely of their plenty here to their friends in England, which were not feigned but true reports.” – William Bradford 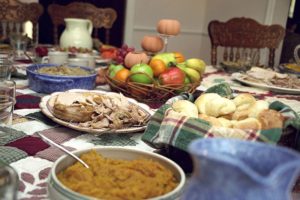 Though certain “Thanksgiving staples,” such as corn and squash were certainly on the table, that first celebration would look FAR different from the modern rendition —  Venison and duck were as equally abundant as turkey, and mashed potatoes, pumpkin pie, and cranberry sauce weren’t even invented yet!

By looking at these letters, we see that venison was a major ingredient, as was fowl. Fish was served, certainly, but something esle COULD have been at the first celebration: insects! And we’re not talking about “buzzing around” insects… we mean the “on the plate, to be served” variety!

Though not conclusively included, Various tribes traditionally included insects in their dietary regimen… For example, the Mono tribe used to create a sort of “trail mix” out of fly pupae, and other tribes have used crickets and insects to make a sort of bread. Still more tribes would often fry insects or roast them. Others still used it in a pulp form, almost like granola. It’s entirely possible that the Wampanoag had similar diet staples, and may have shared in the abundance with their newfound neighbors….

What do you think? Do you think insects were on the menu for that first Thanksgiving? Would you try a Thanksgiving spread that included fried insects or insect bread?

If your home is infested with pests, don’t hesitate to contact us today!