Bed Bugs Bigger Bother Than Before!

The Smithsonian recently reported that current studies indicate that bed bugs could be significantly more hazardous to our health than we thought!

Sure, nobody like having bugs as bunkmates. They come in uninvited, eating whatever they want and generally making an unsightly mess. Not to mention the biting, itching, and scratching that goes on when pests are involved… but now—to add to those sleepless nights— research indicates that bed bugs in the US could become a carrier for Trypanosoma cruzi… the parasite which causes Chagas disease.

Chagas disease is a disease that can result in heart failure and, ultimately, death. In the early stage, symptoms are typically either not present or mild and may include: fever, swollen lymph nodes, headaches, or local swelling at the site of the bite. After 8–12 weeks, individuals enter the chronic phase of disease and in 60–70% of individuals, it never produces further symptoms. The other 30 to 40% of people, however, develop further symptoms long term, such as enlargement of the ventricles of the heart. 20 to 30% of theses cases end up leading to heart failure.

Early treatments for Chagas are effective at curing the disease, but often have side effects, and the longer an individual goes undiagnosed or untreated, the less effective the treatment becomes. There is no vaccine currently available for preventative measures. The best method of prevention is to eliminate the threat of being bitten. 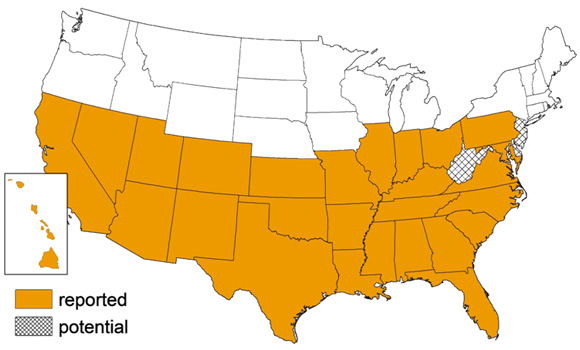 Although Chagas disease is typically attributed to Triatominae (also known as “kissing bugs”) in South American regions, researchers have found evidence of the Chagas virus in the US — 40% of “kissing bugs” captured by researchers in Louisiana were infected with the parasite. “Kissing bug” territory has been positively identified in half of the United States (see chart above). Studies indicate the T. cruzi parasite has ALSO taken up a comfortable residence in the digestive system of bed bugs, which are a close relative of the Triatominae.

How likely is the scenario of a wide scale infection? An estimated 300,000 people in the U.S. are already positive for Chagas disease, and in addition to having kissing bugs AND bed bugs as carriers, the T. cruzi parasite can also live in pets who have been infected by those bugs. Any fecal matter left by these pets can potentially be contaminated. The disease can also be transmitted via blood transfusion / contact.

The CDC is already predicting that “kissing bugs” (the primary carriers for the disease) will expand their territory range as the national climate begins to warm, and bed bug activity has been on the rise in Los Angeles and surrounding areas since 2011.

ABC News reported in 2013 that Los Angeles and surrounding areas ranked 3rd in “Worst Bed Bug Infestations” based on bed bug services provided… the year before the city was ranked at number 5. This year, Los Angeles and surrounding areas rank at #2 and San Diego jumped up 6 spots on its own! Bed bug activity is on the rise, and shows no indication of slowing down… which compounds the risk of Chagas infection.

Which is a prime reason to get started on bug and pest prevention now!

Contact us to find out about our pest prevention services today.

Think your city might be infested? Check out the map below to see the 50 spots that have had the largest occurrences of bed bug infestations in 2013. Click on the dot to see the latest ranking and the previous year’s ranking.

For reference, these are this year’s top 50 U.S. cities, ranked in order of the frequency of bedbug treatments, and their ranking compared to last year: